A Million Miles in a Thousand Years: What I Learned While Editing My Life by Donald Miller 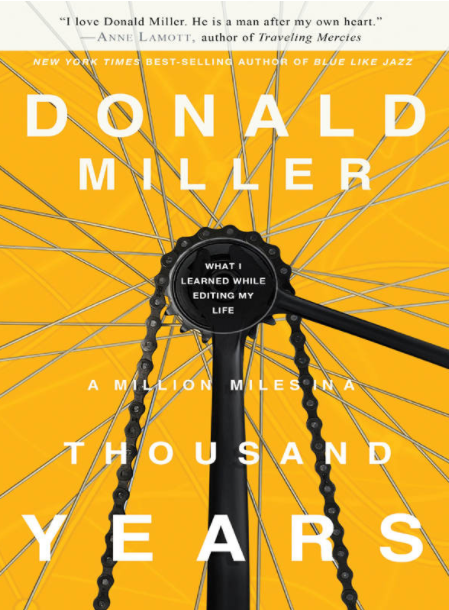 A story about someone who is trying to write a book and realises that it is in fact the story our life tells that is important.

Suggests nobody would cry at the end of a movie if it was about a guy who wants a Volvo car then gets this, achieving his desire. If we think about our legacy we spend years actually living fairly stories, and expect our lives to feel meaningful.

A story involves a character who wants something and overcomes conflict to get it.

One of the reasons we fail to acknowledge the brilliance of life is because we don’t want the responsibility inherent in the acknowledgment. We don’t want to be characters in a story because characters have to move and breathe and face conflict with courage. If we perceive life isn’t remarkable, then we don’t have to do any of that; we can be unwilling victims rather than grateful participants.

Remember people only knows what you say and do, not what you thinks and feels.

Overtime we change, however people often only tend to change if forced to.

Book suggests he found the voice of the greater good (God) which made him question things he was doing in his life.

Ageing provides us with deeper perspective to view our experiences with.

Mentions that in stories characters need to be developed for you to care about them. If the reasons our lives seem so muddled is because we keep walking into scenes in which we, along with the people around us, have no clear idea what we want. he reward you get from a story is always less than you thought it would be.

The point of a story is never about the ending, it’s about your character getting moulded in the hard work of the ​middle.

God says to Job,  I know what I am doing, and this whole thing isn’t about you. Job responds, even before his health and wealth are restored by saying, “All of this is too wonderful for me.” Job found contentment and even joy, outside the context of comfort, health or stability.

The author states he realized that for years I’d thought of love as something that would complete him and make all his troubles go away.  He suggests others think this as well hence why so many couples fight, because they want their partners to validate them and affirm them, and if they don’t get that, they may argue.

Suggests when he meets God they will sit down and remember his story together, and then God will stand and put his arms around him and say “Well done” and his soul will be content.

PrevPreviousYou Are Not Your Brain: The 4-Step Solution for Changing Bad Habits, Ending Unhealthy Thinking, and Taking Control of Your Life by Jeffrey M. Schwartz & Rebecca Gladding
NextElon Musk: Tesla, SpaceX, and the Quest for a Fantastic Future by Ashlee VanceNext