A Whole New Mind: Why Right-Brainers Will Rule the Future by Daniel H. Pink 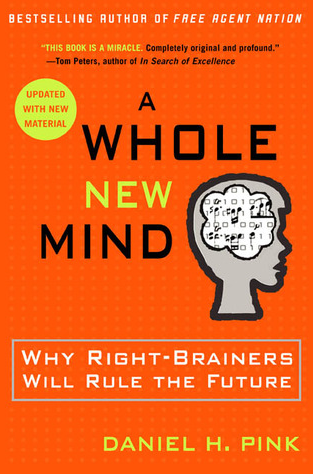 Computers are now able to do many tasks faster and better than humans, such as beating world champions at chess.  Given international outsourcing is possible if you are solely follow orders you could be undercut and out of the work market.  So what can we do about it?

Light touch leadership is required; this involves analytic tasks and seeing the big picture, different parts of the brain are used more for certain tasks tasks.  Very broadly speaking the left brain is used for more analytical tasks whereas the right brain is useful for seeing the bigger picture.  In life we need both parts of the brain to work well together to be successful in the modern age we need high touch and high concept productivity.

Analytical reasoning can be improved by high-concept, high-touch senses.  The following six are focused on: Design, Story, Symphony, Empathy, Play and Meaning.

Design, not just function it is down to user experience, how you interact with objects merging utility and significance.  A scholar John Heskett defines design as “stripped to its essence, can be defined as the human nature to shape and make our environment in ways without precedent in nature, to serve our needs and give meaning to our lives.”   If something is designed well it could have a competitive edge in the market place.  This is something at present computers can’t do and it is important that professional should also be designers, as they have relevant knowledge of their field.  Experience is the most important part of living, and the exchange of ideas and human contact is all life really is. Space and objects can encourage increased experiences or distract from our experiences.

Story, build a compelling argument with a story not just facts. Stories memorable make a connection, one template is the hero’s journey this has three main parts: Departure, Initiation, and Return. The hero hears a call, refuses it at first, and then crosses the threshold into a new world. During Initiation, he faces stiff challenges along the way—usually with the help of mentors who give the hero a divine gift—he transforms and becomes at one with his new self. Then he returns, becoming the master of two worlds.

Symphony,  putting the pieces together. The greatest demand today isn’t analysis but synthesis – seeing the big picture, crossing boundaries, and being able to combine disparate pieces into an arresting new whole.  Some people with dyslexia are able to bringing different disciplines together  and see the whole picture well.  The person who invented a wheel was an idiot, the person who invented the other three was a genius.

Empathy, those who thrive will be their ability to understand what makes their fellow woman or man tick, to forge relationships, and to care for others. Logic alone is not enough, but importantly empathy can’t be outsourced.  Empathy is the ability to imagine yourself in someone else’s position and to intuit what that person is feeling.  It is the ability to stand in others’ shoes, to see with their eyes, and to feel with their hearts. Empathy isn’t sympathy —that is, feeling bad for someone else. It is feeling with someone else, sensing what it would be like to be that person.

Play. There are benefits to your health and professional benefits of laughter, light-heartedness, games, and humour, don’t be serious all the time.

Laughter clubs have been made to make life more playful.  “When you are playful, you are activating the right side of your brain. The logical brain is a limited brain. The right side is unlimited. You can be anything you want.”

A true smile is the one that reaches your eyes, making the corners wrinkle up with crow’s feet.  Whereas a fake smile doesn’t include the eye muscle movements.  Duchenne described this “The emotion of frank joy is expressed on the face by the combined contraction of the zygomaticus major muscle and the obicularis oculi. The first obeys the will but the second is only put into play by the sweet emotions of the soul.” You can look online and find test that assess your ability to judge facial expressions.

It is of note that video gaming resemble the aptitude of Symphony —spotting trends, drawing connections, and discerning the big picture. “What we need people to learn is how to think deeply about complex systems (e.g., modern workplaces, the environment, international relations, social interactions, cultures, etc.) where everything interacts in complicated ways with everything else and bad decisions can make for disasters,”.  Glad to hear that even doctors can benefit from a little time at the games console.  One study found that physicians “who spent at least three hours a week playing video games made about 37 percent fewer mistakes in laparoscopic surgery and performed the task 27 percent faster than their counterparts who did not play.”

1. Can someone overseas do it cheaper?

2. Can a computer do it faster?

3. Am I offering something that satisfies the non-material, transcendent desires of an abundant age?

These three questions will mark the fault line between who gets ahead and who gets left behind. Individuals and organizations that focus their efforts on doing what oversees knowledge workers can’t do cheaper and computers can’t do faster, as well as on meeting the aesthetic, emotional, and spiritual demands of a prosperous time, will thrive.

PrevPreviousTug of War: A Judge’s Verdict on Separation, Custody Battles, and the Bitter Realities of Family Court by Harvey Brownstone
NextTo Sell is Human: The Surprising Truth About Moving Others by Daniel H. PinkNext