Higher Status: The New Science of Success and Achievement by Jason Capital 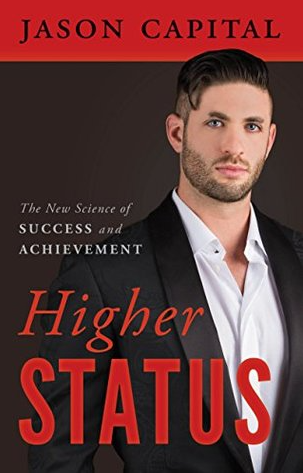 High-status people are excited about where they’re going and what they’re doing in life, so their focus stays on their behaviour, not the outcome of a situation.  This book looks at how you can become high status and achieve more with your life.

People tend to make snap judgements about your status, these can be hard to reverse so dress sharply.  Remember everyone needs a greater purpose.  Status and possession of resources are separate qualities.

The world will accept the judgment you place on yourself.

Interestingly regarding rapport- if you are high status you are not trying to gain rapport, others should seek to gain this with you. Don’t change your body language in response to the environment, use strong postures like a steeple with your hands, be sure not to cover your torso as this can be interpreted as a sign of weakness

A high status voice is:

People are constantly looking for patterns in the way people speak. Once the pattern is deciphered, people become desensitized to it and begin to tune them out.  When you change your vocal tonality and the speed at which you speak, or the volume, you’re preventing listeners from finding a pattern. Think Russell Brand.

One small degree of change can affect everything it is only over time the impact is easy to notice.

You need to put in effort to improve yourself, habit change can be broken down into phases:

Days 1 to 10 are the resisting your old, mediocre habits which are pulling you down. Put the effort in to resist them.

Days 11 to 20 defying-the-old phase, in which you start to build momentum toward the new habit.

Days 21 to 30  the adaptation phase, which is the point where you begin adapt the new habits. You still need to focus and avoid slip ups, but once you get past day 30, it’s going to become a habit for you.

Change can be intimidating for other people and difficult for them to accept, but don’t let that deter you. Remember, you’re on your path to your high-status destiny, and the hard truth is they probably aren’t.

Think about your own purpose and what you want to achieve.  A story about JFK in which his ship was sunk by a Japanese ship and he ended up stranded on an island with the rest of his crew. He led the men to another small island a few miles’ swim away, all while pulling an injured crewman despite Kennedy’s own back injury.  JFK later said he envisioned the experience as a story he could one day tell others to inspire them.

Crazy, unexpected challenges and your ability to control your state while you fight through them that will make the story of your life that much more interesting.

To be “high-status” you have to be able to control your own state, to master your state control:

Any time you feel your state going down, or you’re starting to feel fatigued, or something happens and it’s affecting you, do something unique. Do something big and physical. Jumping up and down and screaming, “I love myself, I love the world,” is a great option. Just do something that gets your entire body moving, and do it for between ten and thirty seconds. It’s a reset for your state, and you’ll notice it immediately.

Personal and unique to you, incorporating words and adjectives that vibe with the kind of person you are. Just make sure they are positive and easy to repeat. Laughably the author’s favourite loop is one of the simplest. Just to tell himself, “I love myself.”

If you are worried about holding eye contact, for example to reset this you could use the perspective loop to “Am I going to die?” – answer being no.  Simply saying that to yourself in the moment can help alleviate anxiety.

Carefree is important to achieve if you want to be high status.

Being carefree means you don’t focus on the outcome, but rather on your own actions. Our own actions are entirely within our circle of influence, while most outcomes are within our circle of concern. An interesting story is told about, Steve Jobs who actually sold a computer to the King of Spain.  Jobs wasn’t worried about impressing the king, he was focused on having a great conversation, practising his sales skills, and enjoying the fun of just going for it. If the king had said no, or ended their conversation early, Jobs wasn’t going to judge himself by that outcome.

Carefree people do not have zero concerns.  They just have a much bigger circle of influence than circle of concern. People who are carefree are keenly aware and highly focused on the things they can control. Think Harvey Specter from suits, they don’t feel a need to do things to gain validation, because they are certain of themselves. Their circles of influence are big, and their circles of concern are small.

If you find yourself relying on the evaluations of other people in your life, you must start listening to the
coach who knows you best – you. Evaluate yourself wholly on your own behaviours, not outcomes.

You can become as close to a new acquaintance as one of their closest friends in a matter of minutes. It’s not a hard and fast checklist, that wouldn’t be genuine.  Try to steer the  first conversation with a person to hit questions that will allow you to have learned that person’s main goal in life, the thing they fear the most, their greatest passion, the names of their family members and share at least one inside joke with them.

At times sharing a secret is a way of gaining rapport, you may also discover a secret!

Act with certainty – this inspires others.  Mentions a study in which someone was crossing a road with certainty seven times more people followed them than a person who crossed the road in a hesitant fashion.

The media trains us to focus on what’s wrong, not what’s right or what’s positive. Therefore be sure to ‘bank’ the complements you receive.

The first step in high-status style is catching someone’s attention. If you can’t do that, you won’t be
able to signal your high status or make yourself unforgettable.  Without attention, there’s no influence, and without influence, there’s no opportunity to build.

Be around others who are wanting to achieve.

Do you lose that hunger and simply become content with maintaining at the same level?

Or do you stay hungry and push yourself even harder?

You want your environment to keep that hunger value high, and that happens by surrounding yourself with people who are also hungry. Don’t be surrounded by others who pull you down like a crab stopping another escaping from a bucket.

Be a doer, not a talker. Be an action-taker, a leader.  Eagles soar through the sky and hunt their
prey. They fiercely protect their families and move with purpose and pride. Ducks, on the other hand, just waddle around quacking. They talk a lot, but they move slowly and don’t get a lot done. Don’t be a duck, opt to be an eagle. Go and soar!

PrevPrevious‘I love you but I’m not in love with you’ What happens when the passion goes? Andrew G. Marshall
NextTug of War: A Judge’s Verdict on Separation, Custody Battles, and the Bitter Realities of Family Court by Harvey BrownstoneNext