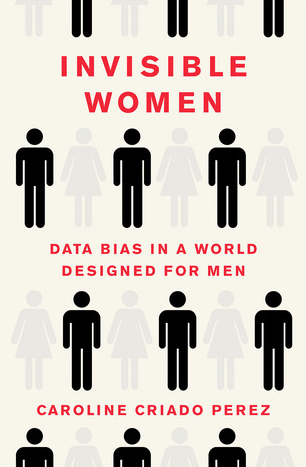 Women are under represented in data sets.  The presumption that what is male is universal is a direct consequence of the gender data gap. Whiteness and maleness can only go without saying because most other identities never get said at all. But male universality is also a cause of the gender data gap: because women aren’t seen and aren’t remembered, because male data makes up the majority of what we know, what is male comes to be seen as universal.

Women frequently didn’t have ‘broad name recognition’, because a woman barely has to die before she is forgotten – or before we consign her work to the gender data gap by attributing it to a man.  By default emojis were men, not women.  In languages if you’re referring to a group of people in Spanish for example they are men as default men, unless this specifically referring to women.  In addition, translation applications tend to have the default set as man.

Traffic planning for example is slanted toward men in part because men were the ones who were more likely to work in traffic planning. Therefore the committees thought about their own commute visualising themselves as the typical user.  Whereas women are more likely to have multiple small journeys and potentially go by foot, in part because they are undertaken caring unpaid roles for the family. Therefore if snow is cleared on roads, not the footpaths this predominantly helps men more than women.

In toilets women take 2.3 times longer in the toilet than men and may have to use sanitary towel, more prone to urinary tract infections.  Therefore the author argues that a 50:50 split on floor space in toilets isn’t fair, particularly when urinals take up less space.  Unfortunately in many countries women are victim of attack when trying to go to the toilet as they are doing this in the dark, outside where there are not adequate toilet facilities.

US universities provide another example of how gender-blind leave policies can end up discriminating against women. US academics in the tenure-track system have seven years to receive tenure after getting their first academic job or they’re fired. This system is biased against women – especially women who want to have children, in part because the years between completing a PhD and receiving tenure (thirty to forty) coincide with the years these women are most likely to try for a baby.

If a database had more slant for one gender I.e. that men are highly paid when artificial intelligence interrogates this database it will factor male names and discriminate against female names.  Data about the amount of unpaid work is low, so basically women appear less productive than men.  An algorithm was made to try to suggest the ideal candidate for the job.  Unintentionally it suggested men more often than women as the ideal candidates.  Unintentionally as males tend to have more free time than females (as they are less likely to be caring for other family members), men were able to contribute to various websites more than women and therefore the algorithm had a bias to select the males.  h

Car crashes: Men are more likely than women to be involved in a car crash, which means they dominate the numbers of those seriously injured in car accidents. But when a woman is involved in a car crash, she is 47% more likely to be seriously injured than a man, and 71% more likely to be moderately injured,46 even when researchers control for factors such as height, weight, seat-belt usage, and crash intensity. She is also 17% more likely to die. Suggests the reasons are all to do with how the car is designed – and for whom. Women tend to sit further forward than men when driving. This is because women are on average shorter and their legs need to be closer to reach the pedals, and we need to sit more upright to see clearly over the dashboard. This is not, however, the ‘standard seating position’. Women are ‘out of position’ drivers.

Crash-test dummies were first introduced in the 1950s, and for decades they were based around the fiftieth percentile male. The most commonly used dummy is 1.77 cm tall and weighs 76 kg (significantly taller and heavier than an average woman), and the dummy also has male muscle-mass proportions and a male spinal column. It wasn’t until 2011 that the US started using a female crash-test dummy.  Although it remains the majority of the tests are performed on male dummies

In addition, the rates of deaths include only driver deaths because the presence of passengers is unknown.’ This is a huge gender data gap. When men and women are in a car together, the man is most likely to be driving. So not collecting data on passengers more or less translates as not collecting data on women. The infuriating irony of all this is that the gendered passenger/driver norm is so prevalent that, the passenger seat is the only seat that is commonly tested with a
female crash-test dummy anyway, with the male crashtest dummy still being the standard dummy for the driver’s seat. So stats that include only driver fatalities tell us precisely zero about the
impact of introducing the female crash-test dummy.

In the 1983 film Yentl, Barbara Streisand plays a young Jewish woman in Poland who pretends to be a man in order to receive an education. The film’s premise has made its way into medical lore as ‘Yentl syndrome’, which describes the phenomenon whereby women are misdiagnosed and poorly treated unless their symptoms or diseases conform to that of men. Suggests that weak contractions when giving birth, premenstrual syndrome and dysmenorrhoea are all under studied, unlike erectile dysfunction it’s all a result of the data gap combined with the still prevalent belief, in the face of all the evidence that we do have, that men are the default humans.

A US Institute of Medicine publication on chronic pain from 2011 suggested that not much has changed, reporting that women in pain face ‘delays in correct diagnosis, improper and unproven treatments’, and ‘neglect, dismissal and discrimination’ from the healthcare system.  In Sweden a woman suffering from a heart attack will wait one hour longer than a man from the onset of pain to arrival at a hospital, will get lower priority when waiting for an ambulance, and will wait twenty minutes longer to be seen at the hospital.

Given women live longer and spend more of their later years in ill health they arguably need more money for retirement, not less. Some policies have compounded the problem of feminised old-age poverty.  The book suggests that female bodies are simply not afforded the same level of medical attention as male bodies is often brushed aside with the riposte that, on average, women enjoy more years of life than men. It is true that female life expectancy remains longer than male life expectancy, the gap is narrowing.  As women’s lives have become less prescriptive and occupational safety in male-dominated jobs has become more stringent, there is evidence to suggest that the female mortality advantage isn’t exactly secure.

And while men’s years of good health have increased in line with their longevity, both women’s longevity and active years have increased at a much lower rate: thirty years of US health data showed that, while women live on average five years longer than men (in Europe it is 3.5 years), those years are spent in ill health and disability.

Analysis by the Women’s Budget Group (WBG) found that tax and benefit changes since 2010 will have hit women’s incomes twice as hard as men’s by 2020. To add insult to injury, the latest changes are not only disproportionately penalising poor women (with single mothers and Asian women being the worst affected), they are benefiting already rich men. According to WBG analysis, men in the richest 50% of households actually gained from tax and benefit changes since July 2015.

Why is the UK government enacting policy that is so manifestly unjust? The answer is simple: they aren’t looking at the data. Not only are they not quantifying women’s unpaid contribution to GDP, the UK government (like most governments worldwide) also aren’t gender-analysing their budgets.

British government’s decision to introduce universal credit has been unfortunate for women.   UC merges several benefits and tax credits (including child tax credit) and, unlike the benefits it replaces, it is paid by default into the account of the main earner in each household. Given the gender pay gap, this is almost universally the man in heterosexual couples – and ‘almost universally’ is as exact as we’re going to get on this, because the UK’s Department for Work and Pensions isn’t collecting
sex-disaggregated data on who the money is going to.

Suggests the assumptions that poverty can be determined at a household level, and that ‘female-headed’ has the same implications for male poverty that ‘male-headed’ has for female poverty are wrong.  These are based on faulty data and non-gender-sensitive analysis. Potentially this perpetuates the gender data gap.

This is a concept in social psychology that is sometimes called ‘naive realism’ and sometimes called ‘projection bias’. Essentially, people tend to assume that our own way of thinking about or doing things is typical. That it’s just normal. For white men this bias is surely magnified by a culture that reflects their experience back to them, thereby making it seem even more typical. Projection bias amplified by a form of confirmation bias, if you like. Which goes some way towards explaining why it is so common to find male bias masquerading as gender neutrality. If the majority of people in power are men – as they are – then majority of people in power just don’t see it. Male bias just looks like common sense to them. But ‘common sense’ is in fact a product of the gender data gap.

PrevPreviousTo Sell is Human: The Surprising Truth About Moving Others by Daniel H. Pink
NextEverything is F*cked: A Book About Hope by Mark MansonNext