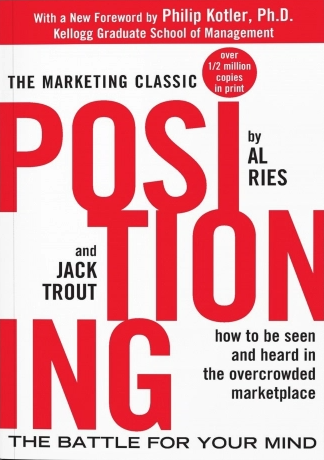 ​What’s called luck is usually an outgrowth of successful communication.  Saying the right things to the right person at the right time.

Positioning – “How you differentiate yourself in the mind of your prospect.”  This concept is important in advertising, you can position anything. A person, a product, a politician. Even a company.

To be successful today, you must touch base with reality. And the reality that really counts is what’s already in the prospect’s mind.  To be creative, to create something that doesn’t already exist in the mind, is becoming more and more difficult. If not impossible.  The basic approach of positioning is not to create something new and different. But to manipulate what’s already up there in the mind. To retie the connections that ​already exist.

In our overcommunicated society, to talk about the impact of your advertising is to seriously overstate the potential effectiveness of your message. It’s an egocentric view that bears no relationship to the realities of the marketplace.

​In the communication jungle out there, the only hope to score big is to be selective, to concentrate on narrow targets, to practice segmentation. In a word, “positioning.”

The only defence a person has in our overcommunicated society is an oversimplified mind.

Outside in thinking: Truth is irrelevant. What matters are the perceptions that exist in the mind. The essence of positioning thinking is to accept the perceptions as reality ​and then restructure those perceptions to create the position you desire.

​If you want to be successful in love or in business, you must appreciate the importance of getting into the mind first.  You build brand loyalty in a supermarket the same way you build mate loyalty in a marriage. You get there first and then be careful not give them a reason to switch.

In advertising, it’s best to have the best product in your particular field. But it’s even better to be first. ​

We might he taught that anything is possible if only you try hard enough. But no matter how hard we try some problems can not be solved by an outside force.  The take home message is don’t fight perceptions with facts. Perceptions will always win.

When naming people or products, you should not let your competitors unfairly pre-empt words that you need to describe your own products, this tactic provides a negative perception.  Find a way to level the playing field. And don’t try to say you are better. Just say you are different.

Two psychology professors, Dr. Herbert Harari and Dr. John W. McDavid, were trying to find out why elementary-school students made fun of classmates with ​unusual names. ​So they experimented with different names attributed to compositions supposedly written by fourth and fifth graders.

​There were two popular names (David and Michael) and two unpopular names (Hubert and Elmer) on some of the compositions. Each composition was ​​given to a different group of elementary-school teachers to grade.  Of note, the teachers that participated in the experiment had no reason to
believe they weren’t grading ​ordinary school papers.

​Would you believe that compositions bearing the names of David and Michael averaged a letter grade higher than the same compositions attributed to Elmer and ​Hubert? “Teachers know from past experience,” say the professors, “that a Hubert or an Elmer is generally a loser.”

​Take Cyril and John. According to psychologist David Sheppard, people who don’t know anyone with these names nevertheless expect a Cyril to be sneaky and a ​John to be trustworthy.

​​You see what you expect to see. And a bad or inappropriate name sets up a chain reaction that only serves to confirm your initial unfavourable opinion. ​Elmer is a loser.  See, he’s not doing that job very well. I told you, Elmer is a loser.

To be well known, avoid using initials.  ​What about FDR and JFK? The irony of the situation is that once you get to the top, once you are well known, then initials can be used without ambiguity. Franklin ​Delano
Roosevelt and John Fitzgerald Kennedy could use initials only after they became famous. Not before.

You can’t make a set of initials ​famous unless you first make the name famous.

When a really new product comes along, it’s almost always a mistake to hang a well-known name on it.  ​This is because a well-known name got well known because it stood for something. It occupies a position in the prospect’s mind.  A really well-known name ​sits on the top rung of a sharply defined ladder.

Extending a company’s brand name to a wide variety of products— is called line extension. This is a trap – The Harvard Business Review has come out and declared that line extension was a no-no, many companies do this anyway, in part as they are keen to expand.

Short term line-extension name is related to the original name, it achieves an instant flash of understanding & sales. Longer term, after the initial recognition of a line-extension brand, the prospect is never quite sure there is such a product, these names are forgettable.  Confusion when one name stands for more than one product can then slowly erode the strength of the brand.

A Company name is a bit like an elastic band.  It will stretch, but not beyond a certain point. Furthermore, the more you stretch a name, the weaker it becomes.

Remember a potential buyer from the outside sees a company name like Coca-Cola as a product not as a company.   Marketing agencies can provide an outside in thinking perspective but can be expensive.

Whether you’re selling soft drinks, companies or countries – out of mind, out of business.

It is worth noting the perceptions of people living in a place are often different from those visiting it.  Belgium was thought of as a country to just pass through, a good advertising campaign was made stating in beautiful Belgium, there are five Amsterdams with a beautiful illustrations ofBelgium’s Michelin ​three-star cities.

In the business of corporate positioning, the perception of leadership is something you can cash at the bank. Whether you’re a chemical company, a bank or an ​auto-mobile manufacturer, when your customers are impressed, you will always do better than your competitors.  Note a successful positioning program requires a major long-term commitment by the people in charge.

Use positioning to market yourself.  Remember to only work in a company that you think is going places – a captain of a sinking ship still sinks.  Make sure you work for a boss who is also progressing and keep in touch with your friends.

Think of two types of individuals come in looking for jobs.  One is inordinately proud of his or her speciality. He or she will often say, “You people really need me around here. You’re weak in my speciality.” ​The other type says just the opposite. “You’re strong in my speciality. You do a terrific job, and I want to work with the best.” ​Which type is more likely to get the job? Right. The latter person.

If you wait until an idea is ready to be accepted, it’s too late. Someone else will have pre-empted it.  Putting it another way, anything definitely in is already on its way out!

To ride the “idea” horse, you must be willing to expose yourself to ridicule and controversy.  So maintain faith in others and their ideas and yourself and your purpose.  Trying harder is rarely the pathway to success. Trying smarter is the better way, so try to appeal to a group rather than to everyone.

The solution to a positioning problem is usually found in the prospect’s mind, not in the ​product.

If you want to learn more about marketing, feel free to check out my summary of the main undergraduate recommended book on Marketing is here or a different book about creating funnels.

PrevPreviousFINISH WHAT YOU START: The Art of Following Through, Taking Action, Executing, & Self-Discipline by Peter Hollins
NextExactly What to Say: The Magic Words for Influence and Impact by Phil M. JonesNext