Save the Cat: The Last Book on Screenwriting You’ll Ever Need by Blake Snyder 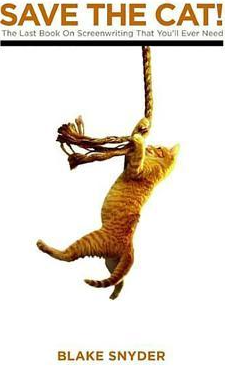 Written by a successful play write and stresses you need to your story summarised in one compelling sentence.  Save the Cat is the screenwriting rule that says: “The hero has to do something when we meet him so that we like him and want him to win.”

For your story make sure you get a killer title, with a killer logline (brief summary) and test this on friends and strangers in the street.  Suggests that all successful movies follow certain themes.

When making your characters the “who” has to serve the “what is it?” – not the other way around.

Once you have that golden idea, that winning pitch, that perfect hook, and don’t quite yet have the “who,” it’s time to go to work to enhance the idea with the right characters, especially the hero of the story.

Write for the actor archetype role not specific with an actor in mind.

It is challenging to structure the film in a certain way that hits the midpoint and the all is lost point, whilst adhering to the need to have conflict in every scene.

Do your homework on genre and figure out what your movie is most like and screened every relevant Hollywood film in the past 20 years.

When you look at films you will be able to know what the film makers did right, what they did wrong, and potentially you can make your own movie which can be very similar, only slightly different and a step forward, convincing yourself it is something new.

Make the perfect hero take their journey. This is the character that offers the most conflict in that situation, has the longest way to go emotionally, and is the most demographically pleasing! Generally you’ve given your hero a primal goal and a real bad guy who wants to stop him from achieving it.

Put up all your great scenes on The Board, tried many ideas, themes, and storylines, until you have whittled it all down to 40 actual scenes with each scene indicating its emotional change from beginning to end and what the conflict is in each scene.

The adjunct to Save the Cat says: “A screenwriter must be mindful of getting the audience ‘in sync’ with the plight of the hero from the very start.” Be sure to bury the backstory – if there is essential information the viewer needs to know perhaps add some comedy but as the two funny guards scene in Pirates of the Caribbean, where we get the low-down on Jack Sparrow.  The author refers to this as ‘the Pope in the Pool’ gives us something to look at when telling us essential facts that what we need to know in a lively and entertaining way.

Take a page of your script and cover up the names of the people speaking. Now read the dialogue between different characters. Can you tell who is speaking without seeing the name? If not improve your script until you can.

As in Life, character is revealed by action taken, not by words spoken. And in a good movie, information doesn’t come out in dialogue, it comes out in the forward motion of the story.

PrevPreviousThe Wealth Dragon Way: The Why, the When and the How to Become Infinitely Wealthy by John Lee and Vincent Wong
NextTED Talks: The Official TED Guide to Public Speaking by Chris J. AndersonNext