The Digital Doctor: Hope, Hype, and Harm at the Dawn of Medicine’s Computer Age by Robert M. Wachter 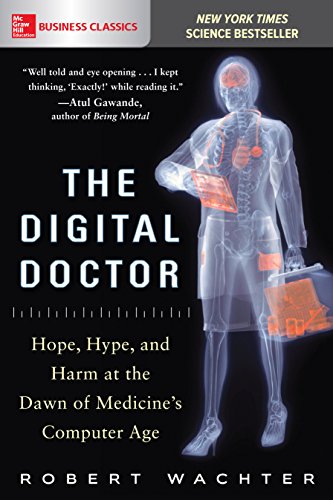 Good account of modern day health care and the requirements for digital to be implemented. Provides balanced arguments of the risks and benefits of digital implementation. Summarises some (mainly US) history including Barack Obama and President Bush pledges to fix this. Touches on large issues in the field of clinical informatics such as interoperability and the rise of some companies such as EPIC. Suggests that EPIC became so large as they offered a solution to many issues (prescribing, laboratories, billing, medical and nursing documentation) that actually works and was adopted by several large hospitals. If you are in a different hospital or clinic and also have EPIC you can get this information, if you have a different system then you can’t.

I like the bit about how computers have got in the way of the doctor-patient relationship, so much so that in some hospitals if you attended having lost a limb people would not believe you until you have had a CT scan reported and an orthopaedic opinion (this is his joke).

Contains a lot of information about the struggles of implementing an electronic open health care record. The challenges of patients obtaining useful access to their records (not just booking appointments). Ends with a slightly scary tale of the future predicting remote monitoring of patients, with large screens that can zoom in on patients to even see their pupils dilate, these are remotely monitored by artificial intelligence, machines can do most of the work (such as cannulation) and physicians are overseeing this. If you’re interested in an overview of health Informatics would highly recommend this book.

PrevPreviousHow To Find a Black Cat in a Dark Room The Psychology of Intuition, Influence, Decision Making and Trust * Especially When There is No Cat By Jacob Burak
NextIkigai: The Japanese Secret to a Long and Happy Life by Albert Liebermann and Hector GarciaNext