The Genius Checklist: Nine Paradoxical Tips on How You can Become a Creative Genius by Dean Keith Simonton 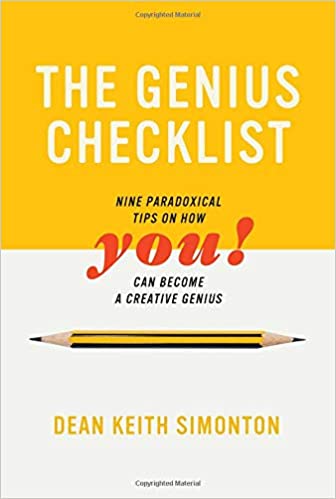 A lot of content, well written and very well referenced, the nine ‘tips’ correspond to each chapter.

Outlines there are different ways of being a genius, although traditionally taking the IQ test scoring 140 or more is one way of being a genius. With perseverance and passion dedicated to one particular aspect of life such as art you can achieve the genius status without scoring highly on this test.

Contains interesting studies about previous geniuses and the association of mental health illness. Suggests that if you are in an art not a science discipline then, at times mental health issues can mean you’re more likely to think outside the box and achieve a state of what’s known as genius. If you have a high IQ and some mental health issues this can mean you’ll be more likely to observe two different perspectives and obtain breakthroughs.  Suggests that the popular conception that people who are crazy are geniuses is mainly because there’s a few of them have been studied and reported extensively. There are many more geniuses who are not as well known because they’re not as interesting to write about and don’t have significant mental health issues.

Artistic creators and geniuses are more likely to have broken hope and diverse childhood experiences, where as scientific geniuses tend to come from or stable backgrounds.

An example to achieve the most is a concept called ‘satisfies’. Unlike perfectionism in which multiple revisions of one thing occur.  Satisfies is doing things to a satisfactory standard but being prolific and putting out a lot of content out there.  This means that one of your things may actually be very good, simply because you’re putting out a lot so your chances are that one of your outputs will be good increases.

Mentions about how historically Galton’s 1874 survey of Royal Society Fellows asked how many siblings Fellows have if if they were older or younger. Not clear how to answer if had an older sibling you never met or half brothers however this found that lots of these fellows were firstborn males.  This didn’t really adjust statistically for the complexity of order of birth, if you’re an only child you would automatically be first and last born but it did seem that firstborn males were more likely to be considered genius.

If you are a creative genius in the art quite often you’re not a perfectionist and try to explore different aspects of art.  This is unlike scientists who too often it is their perfectionism that stops them exploring different areas and becoming a genius.

There is a type of genius known as a polymath, this person is able to obtain genius level in more than one speciality.  These specialities are completely different rather than sub specialities of something that’s very similar. Generally this book supports the 10,000 hours of work to become a genius in a particular field but the polymaths go against this as there simply aren’t enough hours they have been alive. Suggests that natural talent can shorten the length of time to acquire expertise.

Things such as chess, composers and mathematics are highly abstract domains with well-defined and relatively finite rules and goals. This means that expertise and major contributions to the fields can be provided earlier in the genius life, potentially as child prodigies. Suggests that literature and art acquiring expertise takes more life experience.

Mentions about Thomas Edison clear prolific inventor who kept trying and is well known from the light bulb invention.  Outlines more about his other patents, for example he almost lost all of his light bulb monies on a patent about cement which attempted to build whole houses, including appliances out of cement.  This cement idea failed so the rule certainly is not that every failure leads to success.

Eminence tends to occur for some geniuses when their significant works live on past their own life.

PrevPreviousThe Startup Way: How Modern Companies Use Entrepreneurial Management to Transform Culture and Drive Long-Term Growth by Eric Ries
NextGetting (More Of) What You Want: How the Secrets of Economics and Psychology Can Help You Negotiate Anything, in Business and in Life by Margaret Ann Neale and Thomas LysNext