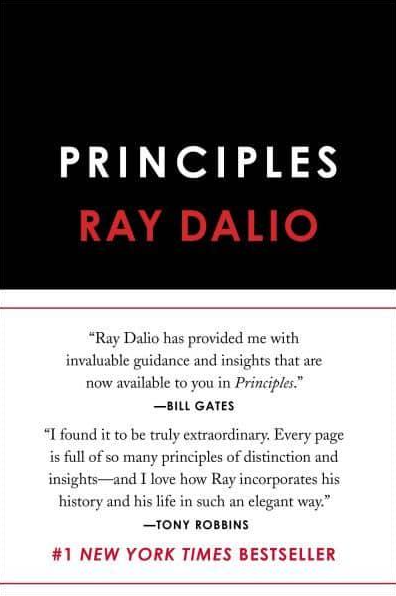 You want to have principles that you live by, therefore you can swiftly make decisions without having to think about every problem you encounter from scratch.

Maturity is the ability to reject good alternatives in order to pursue even better ones.

Regarding artificial intelligence author thinks this is beneficial however suggests the key to success is when the right people are working with each other and with computers.

Success is a double edged sword Australians call it the “tall poppy syndrome,” because the tallest poppies in a field are the ones most likely to have their heads cut off.

Get your goals sorted, then think of how to achieve this.

The process of learning is the best key to happiness.

Know what you are good at and most importantly when to ask for advice from others to make decisions.

Worry about achieving the goal.

Make your decisions on the basis of first-, second-, and third-order consequences.

Understand how to manage pain to produce progress.

Hold yourself and others accountable.

Distinguish proximate causes from root causes. Proximate causes are typically the actions or lack of actions that lead to problems, these are described with verbs. Such as I missed the train because I didn’t check the train schedule. Root causes are deeper and typically are described with adjectives, such as I didn’t check the train schedule because I am forgetful. You can only truly solve your problems by removing their root causes, and to do that, you must first distinguish the symptoms from the underlying cause.

Good work habits are vastly underrated. People who push through successfully have to-do lists that are reasonably prioritized, and they make certain each item is ticked off in order.

Establish clear metrics to make certain that you are following your plan. Ideally, someone other than you should be objectively measuring and reporting on your progress.

3. Diagnose problems to get at their root causes

5. Push through to completion.

Two barriers to be aware of ego and blind spots, overcome these with radical open mindedness.

Be open minded, triangulate and discuss issues with other open minded people to come to best solution. Suggests open-minded people are always more interested in listening than in speaking.

Closed-minded people have trouble holding two thoughts simultaneously in their minds, their own view crowds out the views of others.

Shapers are people who can go from visualization to actualization, these people who can build unique and valuable visions beautifully, and overcome the doubts of others. Suggests that he and Steve Jobs are shapers.  Shapers get both the big picture and the details right, typically they have intense curiosity, are independent thinkers who dream big and unconventionally, a practicality and determination to push through all obstacles to achieve their goals.  The shaper can hold conflicting thoughts simultaneously and look at them from different angles. They typically love to knock things around with other really smart people and can easily navigate back and forth between the big picture and the granular details, paying attention to both as equally important. The key is having the higher-level perspective to make fast and accurate judgments on what the real risks are without getting bogged down in details. They also have a knowledge of their own and others’ weaknesses and strengths so they can co-ordinate teams to achieve them.

Perfectionists however spend too much time on little differences at the margins at the expense of the important things.

Typically just five to ten important factors to consider when making a decision.  Whenever a big-picture “by-and-large” statement is made and someone replies “Not always,” this often may mean that you are about to dive into the minutiae.  Potentially these are exceptions rather than the rule, and in the process we will lose sight of the rule.

In his organisation (Bridgewater) they recorded these decision-making principles on paper and later encoded them into computers and made our decisions based on them. Naming this ‘adapting to radical truth and radical transparency’. This takes some time for everyone to get used to, most people believes intellectually in this idea but when they actually do undertake this process can be challenging for them.  Suggests that with careful consideration referred to as ‘upper level’ thinking people understand this decision making process but their immediate reaction, their ‘lower level’ make struggling to come to terms with this.

Generally decisions should be based on what you believe is warranted in a particular circumstance and what will be most appreciated.  The quality of the life you get will depend largely on the quality of the decisions that you make as you pursue your goals.

The best way to make great decisions is to know how to triangulate with others, in particular more knowledgeable people. Be discerning about whom you triangulate with and skilled in the way you do it.

Suggests to be especially sceptical of statements that begin with “I think that I . . .” as most people aren’t good at accurately assessing themselves.

Regarding organisational systems and processes.  When people have both enough power to undermine a system and a desire to get what they want more than a desire to maintain a system, the system will fail. Suggests that when implementing a principles must be given only to people who value the principled way of operating more than their individual interests or interests of their fraction.

Most organizations are bad at recruiting, initially interviewers pick people they like and who are like them instead of focusing on what people are really like and how well they will fit in their jobs.

Suggests the ability to objectively self-assess, including one’s own weaknesses, is the most influential factor in whether a person succeeds. A healthy organization is one in which people compete not so much against each other, the greatest gift you can give someone is the power to be successful.

Giving people the opportunity to struggle rather than giving them the things they are struggling for will make them stronger.

Any problem can be a one-off imperfection, which at times can be permitted but it could be due a symptom of a root cause that will show up repeatedly. You need to determine which it is.

Regarding firing people, a normally reliable person can make the occasional error and if that’s the case, then it can be forgiven. When a problem is attributable to a person, you have to ask why they made the mistake and equate diagnosing a fault in a person as if they were a piece of equipment, if necessary fire them.

‘big-picture visionary’ should be responsible for goal setting.

‘taste tester’ who is assigned the job of identifying and not tolerating problems.

‘logical detective’ who can probe people should be the diagnoser.

‘imaginative designer’ should craft the plan to make the improvements.

‘reliable taskmaster’ should make sure the plan gets executed.

Of course, some people can do more than one of these roles, generally people do two or three of these roles well, however virtually nobody can do them all well.  Few change agents are inventors and also excellent managers.

Therefore a team should consist of people with all of these abilities and they should know who is responsible for which particular steps.

Principles themselves are a form of leverage they’re a way to compound your understanding of situations so that you don’t need to exert the same effort each time you encounter a problem. There’s nothing you can’t accomplish if you think creatively and have the character to do the difficult things!

PrevPreviousThe 5am Club by Robin S. Sharma
NextMeasure What Matters by John DoerrNext