Factfulness: Ten Reasons We’re Wrong About the World – and Why Things Are Better Than You Think by Hans Rosling 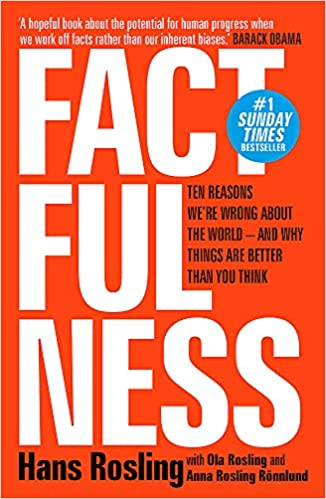 Written by a Swedishphysician who went on to become very influential in International Public Health policy and a well known speaker. Starts with a thought provoking test that aims to show how little you know about the world. Then goes onto explain and rebuke thegap instinct. The gap instinctis that you believe there is Us vs Them, West vs East, Rich vs Poor. It is easy for people to draw sharp lines but the book suggests the majority of people are in fact in the middle. We need to be careful to not think that unusual is usual due to bias of media reporting.

Suggests most natural graphs that can be made are not straight, such as growth charts, although humans tend to think in straight lines. Goes into a fair bit of detail about child mortality data and how it can be used as a proxy for how developed a country is.

Suggests when analysing large data use the 80:20 rule to focus on the most important things. Suggests monitoringrates often provides the most useful data.

Beware of sweeping generalisations, for example taking data from one situation and assume and it will work in another situation. Anexample is studyfrom soldiers injured in battlefields who were found to have a higher mortality if placed on their backs as they may aspirate if they vomit. This studywas unfortunately generalised to babies being encouraged not to sleep on their backs, which was later found to be the incorrect advice.

How a person lives often relates to theirlevel of poverty or richness rather than the country they live in. For example some people may cook in a certain way, but that may relate to what they can afford to do, it wouldn’t be wise to generalise that all people in that country do the same thing.

Population attitudes change swiftly over years. Humans have a tendencyto blame other people for things that really are really nottheir doing.

PrevPreviousPersonality Hacker: Harness the Power of Your Personality Type to Transform Your Work, Relationships, and Life by Antonia Dodge and Joel Mark Witt
NextUnlimited Memory: How to Use Advanced Learning Strategies by Kevin HorsleyNext