How Professors Think: Inside the Curious World of Academic Judgment by Michele Lamont 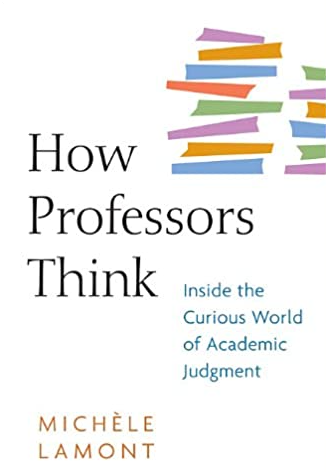 This book explores the dynamics and thought processes behind professors who sit as panellists for fellowship and research grants.  The author is a sociology professor who observed deliberations and interviewed professors trying to decide who to provide these awards to.

Grants and fellowships are becoming increasingly important as academic signals of excellence, especially because the proliferation of journals has made the number of publications of academics a less reliable measure of their status. Of the two, fellowships are considered a better measure of excellence than are grants, because across all the social sciences and the humanities, academics are eager to receive fellowships that allow them to pursue their own research.

Grants, though valuable and customary in the social sciences where research often requires costly data collection, are less important in the humanities.

The benefit to the people who serve on important panels are that they are able to shape things, in terms of who gets accolades. If they agree to select who is defined as excellent, and then they get ensconced in positions in universities to train students of the next generation, and on and on and on.

Those who become linked to the funders themselves gain an insight into how they are going to redefine their own grant applications.

Book suggests the panellists strongly support grant peer review because it is perceived as guaranteeing a relatively clean evaluation process.  This attempts to legitimises the system of distribution of resources for evaluators and applicants, and beyond that, affirms the broader system of academic evaluation and promotion.

To some extent peer review is where agreement on quality is accomplished and where the principle of meritocracy is unquestioned. In America as larger the peer review process at times is more robust as people don’t know each other, in smaller countries lots of the panellists will know each other.

A panel will essentially vote for which applications to fund respecting other panellists’ opinions is an essential quality of a good panellist, mentions at times some panellists are intimidated by other panellists so reluctant to speak up. Different disciplines tend to have different behaviours in terms of assessing applications and individual panellists have their own idiosyncratic interests which can mean the votes are not always predictable.

Across all panels, breaches of the rules of deference to expertise and respect of disciplinary sovereignty are the most frequent source of conflict and the most common threat to the maintenance of collegiality. Failure to defer can be deeply troubling to academics because so much of their self-identity is tied to their role as privileged expert.

Mentions some research exploring Gender Bias in social science research and a particular study of peer-reviewed evaluations of postdoctoral research applications that shows reviewers consistently gave female applicants lower average scores than male applicants, despite similar levels of productivity. The book goes onto suggest that more broadly, we know that men’s traits are generally viewed as more valuable than women’s, and that men are generally judged as more competent.

Panellists sometimes suggest limiting fellowships for applicants who have already received them in the past. This is a sensitive issue, in part because track record is read as indicating excellence, and in part because it raises the issue of need. The legitimacy of need, like that of institutional affirmative action, turns on distributive justice, which is a different principle of allocation than that of merit.

The key issue in this debate is whether scholars who have access to many resources should get more, or whether those who have access to very little should be advantaged. If for example a certain well respected person is the proposed supervisor it may provide the panellists confidence that the work will be done even if they have some doubts about it the proposal.  In essence this is inside-knowledge which makes an assumption about the role between the supervisor and the student. Claims regularly made by lower-rank universities for privileging higher-ranked universities are certainly a force for social change.